Wayne Hart: Carving himself a future

We at Gay Homestays are always interested in other businesses and individuals who have a different and intriguing background and product that they offer, a great work ethic, ambitious minds and have done well to achieve a lot, especially in short amounts of time. We recently met Wayne Hart, who at only 26-years-old is one of the UK’s few remaining carvers of his generation, but has already achieved so much in the space of a few short years. Since leaving university he has done a 3 year apprenticeship and obtained several prestigious scholarships and grants to help fund his work, training and studio start-up costs in AWOL Studios in Manchester – an old cotton mill that is now a workplace for many other creative arts people and their businesses. And this year he won two reputable craft&design awards – a Gold Award in Specialist Media and Selected Maker of the Year award that, in the past has been awarded to very experienced individuals so is an amazing feat to have accomplished. 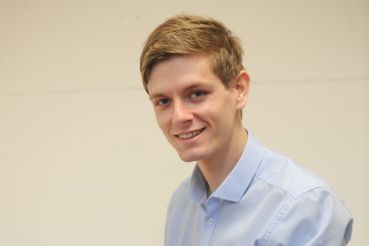 Wayne, who is originally from Norfolk, has always had an interest in art and design since he was a child – his nan was an amateur calligrapher and he loved going to art galleries and museums where he was inspired by ancient Egyptian history, mythology, art, architecture, sculpture and inscriptions, but only got into typography while studying graphic design at college. He later studied Typography at the University of Reading and his interest in this field began to grow as he learnt more, getting into lettering and carving; it was a visiting lecturer who inspired him to start it and has been doing it ever since. He soon got a letter-carving apprenticeship with renowned craftswoman Pip Hall through the Memorial Arts Charity. He now occasionally returns to Reading as a visiting lecturer himself. “I never thought I’d be a carver when I was younger – I originally trained as a graphic designer before moving onto typography and then carving, and it’s just something I specialised in more and more over time,” he says.

“It’s a bit overwhelming with the success I’ve had so far, yet also exciting being one of the youngest but I like to focus on my present projects and always aim high for the future,” Wayne tells us, “I feel I have a responsibility to maintain the craft for future generations but I have both the drive and determination to do this.” He not only wants to maintain the traditional craft of carving but also wants to push it forward with new ideas and modern technologies, saying “of course it’s important to maintain the traditional methods of carving that we use on materials such as stone and wood but it is equally important to accept the technological age. There are technologies out there that allow for new artistic outputs and for the use of additional materials.” An example he gives us is of the commemorative piece of a local poet’s work he recently did in Amiens, France where he used water jets to cut through corten steel – it is the first and so far only time he has done carving on metal.

Having achieved so much in such a short amount of time and having created so many important and great pieces – a few of which, like the piece in France, are available to view in famous public spaces – Wayne has quite a few special moments to choose from as the highlight of his career so far. “I’d say winning Maker of the Year a few months ago was amazing, especially since last year’s winner is already so well-established, so being new to all this and then to follow in her footsteps, it was a great honour.” He says it’s hard to pick one of his favourite works to date but is currently very proud of his working progress of another memorial piece for legendary novelist C.S. Lewis that will go up in Westminster Abbey’s Poet’s Corner in mid-November. “The project is still ongoing and it is a great honour to have my work selected for Westminster Abbey.”

Wayne’s main line of work lies in doing private commissions, usually commemorative gifts, memorials, signage, pieces for craft fairs and craft shops, for interiors and gardens, house signs, etc. but really loves doing larger art pieces for public spaces and exhibitions and galleries. One of his favourite pieces of work that he has done privately was carving a sandstone sphere for his friend’s wedding. “I had to draw directly onto the stone which was my first attempt on a curved surface. It had to be done this way as a flat piece of paper can’t be wrapped around a curved surface. It was also a challenge because the curved surface would distort the lettering, meaning subtle alterations had to be made to make it look right, but I was very pleased with the end result.”

Wayne would love to continue doing more public art pieces that will really put him on the world map as an internationally-recognised craftsman and artist, but also wants to expand into doing sculptures as well. “I wish to pursue sculpture as well as lettercutting in the future which I find an organic progression; both are based on form, structure and texture – things which I have a passion for, and I started this recently by attending a short course in stonecarving at Dartmoor Arts, for which I was awarded a bursary. I also want to take on my own apprentices when I have a bigger studio so I can take on and teach other young carvers my trade as I learnt from my mentors.” We really admire Wayne’s ambitious and business-driven mind, wish him luck for the his bright future ahead and we’re sure he’ll go even further in years to come and achieve his goals and more!

To find out more about Wayne and his work, take a look at the video above and visit his page on AWOL Studios’ website. His own personal website will be coming soon.

Posted in Stories and Interviews